At one of the first socials we had at WHU where we got to meet the German students, we asked them, “Which city do you think is the most beautiful in Germany?”

Yes, it’s an unfair question, but we figured we’d get a nice variety of recommendations for future travel plans. We did get a quite a few answers (Munich, Cologne, Berlin, etc), but one city kept cropping up.

Which I was planning on going to anyway.

So when one of the 2nd semester Tauschies casually announced that she was planning on going to Heidelberg for a day the following Friday, I jumped at the opportunity. 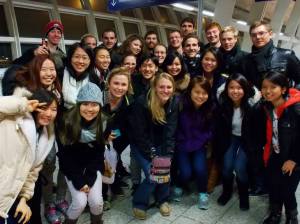 It was almost the same thing that happened when we went to Cologne.

We all met in the morning at the Vallendar Mitte bus stop to go to the Koblenz main train station. From there, we worked the logistics of splitting up into groups of 5 in order to get the Deutsche Bahn group discount. (*TIP for traveling via DB) We got a day pass ticket that involved a lot of transfers, but it only cost us 15 Euro each.

When we got to Heidelberg, we got off at what looked like the city center, but it looked nothing like the Heidelberg postcard pictures we saw when doing research online. (*ahem* research on traveling) Nevertheless, we took a light rail to see the Heidelberger Schloss – the iconic Heidelberg Castle. As most castles are, it was on the top of a hill, so it was quite a steep trek to the top. Especially since my boots were a bit big, and I was so not prepared for a hike. But when we reached the castle, it was absolutely beautiful, and this is what we saw: 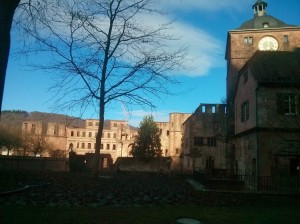 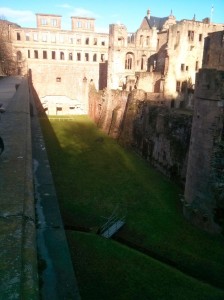 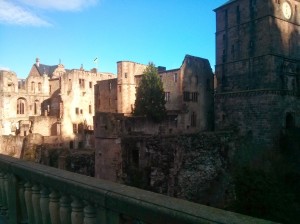 And THIS is probably one of the most postcard-esque pictures I have taken. 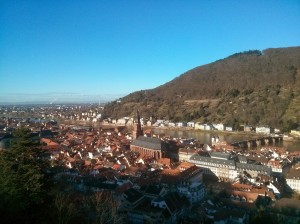 Unfortunately, we had to pay to actually go in and see the ruins of the castle. I think it was 4 Euros, but I know it is 6 Euros to take the tram (round trip) and for entry into the Schloss. That way you don’t have to hike up that hill. But it’s a very scenic way to burn some calories!

At that point, I didn’t have much to burn because I was getting hungry. Some of us stayed back at the castle, but a dozen of us decided to head to the historic city center to find the university and get food. And that was when we saw the sun. 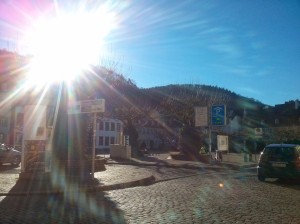 After being in Hawaii for so long and being so used to diving into shade under the trees, the sun had never looked better, shining over the quaint architecture and medieval ruins.

Oh, and did I mention the glorious pastries?

Of course, I succumbed and split a chocolate snowball (the little brown spheres at the top left corner of the picture) with two others. Chocolate on the outside surrounding some sort of angel food cake, with a chocolate-hazelnut creme center. It was divine.

We continued walking till we reached the river and the bridge. On the other side of the bridge, there was a hill where there are remnants of World War II history, a coliseum, and a monastery. The hill looked pretty steep, but the website promised us there would be “strategically placed benches along the trail.”

The story goes that we decided to go up the first part of the hill and see how we felt then whether or not we wanted to grab lunch after. More specifically after the first couple of benches or so. Fair enough.

Three minutes later of trekking up on a 50-degree incline of uneven cobblestone, I regretted it. So much. All we could think about was, “WHERE are those benches?!” Haha.

But when we reached the first bench (like a million years later), the view was amazing.

After climbing some more and asking some passerby who knew the hill better than we did, we surmised that the monastery and coliseum weren’t too far from where we were. So we decided to press on and find them before getting lunch.

The cobblestones disappeared and soon we were literally hiking through a forest on a dirt path. We were high enough to see the river wrapping around the hill and the sun beaming down on the little houses on the other side. It was perfect. The weather was warm, but cool enough to make the walk refreshing. In good time we saw a biker, who told us that both paths in the upcoming fork in the road would lead us to the monastery, which was close to the coliseum. We took the high way, the one that branched off and escalated above the path on the right. This hike was beautiful, scenic, and relatively easy considering this was completely spontaneous and unplanned and the fact none of us were in hiking attire. 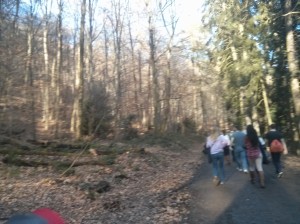 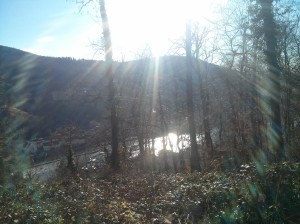 “Relatively easy.” Or so we thought.

30 minutes later, when the trail started getting soft and muddy, and the trees were getting thicker, we realized we must have taken a wrong turn. The website said it would be 45 minutes from the bottom of the hill to the monastery, but even at the quick rate we were walking, we saw nothing, and it had been almost an hour since we crossed the bridge. Should we turn back? Keep going? Are we committed to finding this? When should we get lunch? But being the adventurers we are, we kept going.

At this point, I was EXTREMELY grateful for my previous decision of getting that snowball. Because that was the only thing keeping me moving.

Back in Vallendar, we knew the sun would start to set at around 4:30pm, so by 5:00, the sky would be nearly dark. None of us wanted to be stuck here at nightfall, so we decided to keep walking until a quarter before 3:00 to make sure we would be out of there by 4:00. We eventually turned back, and on our way downhill, we found the path we should have taken.

Which reminded me of:
“Two roads diverged in a yellow wood,
I took the one less traveled,
and that has made all the difference.”
(credit, of course, goes to Robert Frost)

Even though we were tired, hungry, and unsuccessful in finding what we were looking for, it was one of the best hikes I’ve done, and it was totally worth it. Our little group bonded through our excursion, and we got lots of great views of Heidelberg we wouldn’t have gotten otherwise. If I ever have the time (and proper hiking attire), I’m definitely coming back to find what we first set out to see. But that’s another story 🙂

From the Home of the Brave, to the Fatherland, and back to the Motherland

Seek and you shall find!